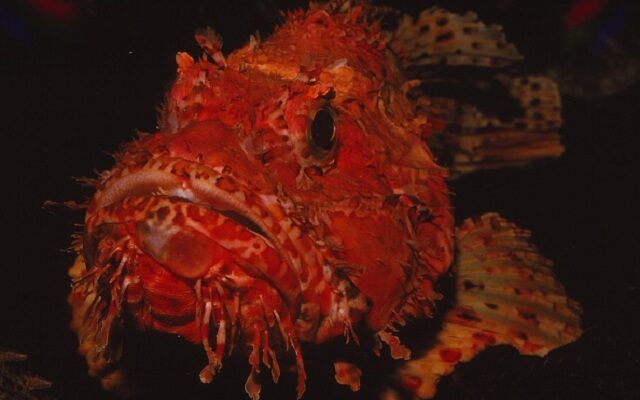 Scorpion Fish, (Peixe Carneiro), 20th century. Scorpionfish, are a family of mostly marine fish that include many of the world's most venomous species. As the name suggests, scorpionfish sting from sharp spines coated with venomous mucus. (Photo by CM Dixon/Heritage Images/Getty Images)

With its long, sharp teeth and fleshy, bioluminescent lure protruding from its head, the Pacific Footballfish is the stuff nightmares are made of. But the fact that the species normally lives at depths between 2,000 and 3,300 feet, most humans are spared the sight of the creepy predator. Until now, that is. A Pacific Footballfish has turned up on San Diego’s Torrey Pines State Beach, where beachgoers gathered to take a look at the modern-day sea monster, according to the Scripps Institution of Oceanography.

“At first I thought it was like a jellyfish or something, and then I went and looked at it a little more carefully, and some other people were gathered around it too,” says resident Jay Beiler. “And then I saw that it was this very unusual fish. It’s mouth almost looked bloody! I’d say it was nearly a foot long.” The discovery has baffled ocean experts, who say Pacific Footballfish rarely venture out of their deep-sea comfort zone. Sunlight doesn’t reach depths of 2,000 to 3,300 feet, according to the California Academy of Sciences.

What’s the weirdest thing you’ve found on a beach?