Getting Ready For Severe Weather Season! 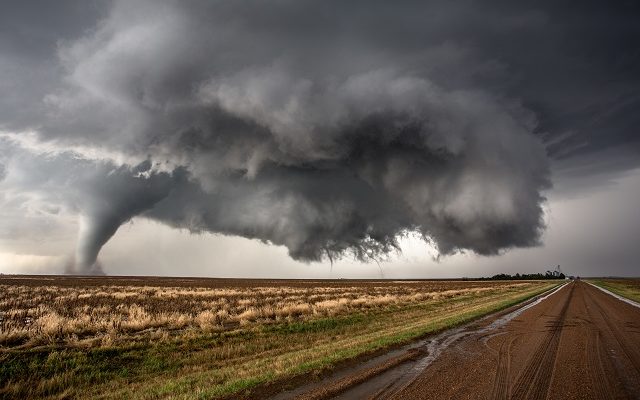 Three tornadoes on the ground at the same time near Dodge City, Kansas, May 24, 2016.

You’d think with everything that’s been happening lately, maybe Mother Nature would give us a break!  But that seems unlikely.  Instead, we’re about to kick into our annual Severe Weather season.  From now until mid-September (or later…or earlier…or who really knows when)  all of us here in the Texas and Oklahoma Panhandles tend to pay a little bit more attention to the sky and the radio.

We all have dramatic stories about encounters with severe weather.  Maybe you had a great new car bombed by softball-sized hailstones back in 2011.  Or maybe you’ve seen blades of switch- grass embedded in a telephone pole.  FYI – both of those things happened to me!  I’ve had a keen interest in severe weather for about 25 years.  I spent the first part of my broadcast career shooting video for, and storm chasing with, Doppler Dave Oliver!  And when you learn from the best, it tends to stick with you.

I’ll be writing more about this years’s severe weather in the coming weeks.  And i’m very proud that my career has come full circle  and I’m once again working with Dave.  Here at 100.9 The Eagle, our media partners are KFDA NewsChannel 10!  So I get to chat with my old storm chasing buddy pretty regularly.

With that in mind, I thought we should run through some basic weather terms.  Y’know, for any newbies or green-horns who may have only recently moved here.

Severe Thunderstorm WATCH – There is the possibility of a severe storm in your area, and you should remain tuned to radio/television for further weather information.

Severe Thunderstorm WARNING -Conditions are favorable for severe storms in your area.  High winds (over 60 mph), heavy rainfall, hail and/or tornadoes are possible. Avoid places in your home that have large panes of glass, try to stay off the roads, park your car under covered shelter if possible, and continue monitoring local radio/television for further information.

Tornado WATCH – There is the possibility of conditions favorable to the formation of tornadoes in your area.  Stay alert, and tune to local radio/television stations.

Tornado WARNING – This warning should be heeded immediately.  Either a “Radar Indicated” or a “Spotter Indicated” tornado has been detected   Seek shelter in the most interior room in your home if no tornado shelter is available.  Have a “Severe Weather Kit” handy, with flashlights, batteries, a radio, water, and some non-perishable food items.