Daniel Klaehn always has something interesting going on at WT.  Whether it’s studying the intricacies of a Bob Seger song or assigning writing projects based on Batman.  He keeps his students and Writing Center coworkers looking forward to whatever’s next!

Currently, there’s a hot debate going on in the UWC.  The gang has drawn up brackets that resemble a certain (ahem) seasonal basketball tournament, and posted 128 song titles from the 1980s  Then, after much gnashing of teeth and some hurt feelings, they began the process of elimination.

At some point during March, this madness will result in a Grand Champion 80s song!

So… bear with me while I post this first ‘bracket’ and we get this thing started.  I’ll neaten things up with the help of Daniel Klaehn and the gang at the WT Writing Center.  But for now, here are the gritty, battle-scarred beginnings of this titanic struggle between 80s Song Titles!

Will your favorite 80s hit take the top spot? It’s easy to understand why people who, for the most part, weren’t even born when these songs were first released would want to be so engaged with this music. Its has a universal feel-good appeal that transcends era and fashion.

I’ll keep these results posted for you in the coming days and weeks.  Maybe we’ll play the winning song on 100.9 The Eagle’s Totally 80s Friday! 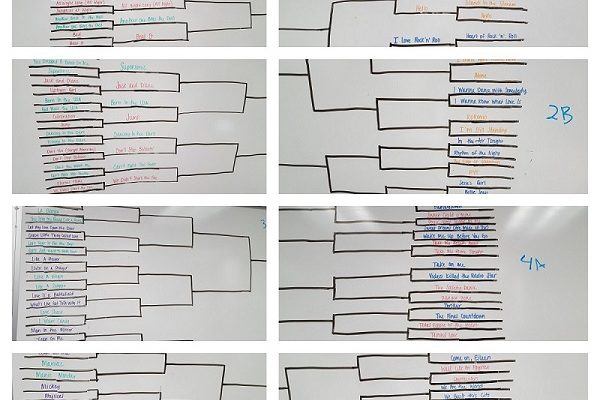